Long promised, but nothing delivered and the Sydney Harbour Bridge remained inaccessible to people who can’t use stairs! The Physical Disability Council of NSW mobilised it’s member base to lobby through multiple channels, ministerial meetings, social and mainstream media were all deployed, culminating in a mass rally at the steps of the Harbour Bridge, no mean feat for folks who struggle with Sydney’s poor accessibility standards

Accessible public transport is very limited, doesn’t always work and is not overly reliable, private transport cost prohibitive and very restrictive with regards to availability. But none the less a gathering was planned at the steps at iconic Sydney Harbour Bridge, people began to register and pressure started to mount. And in fab news just before the planned rally – the government recommitted it’s funding and announced dates for restarting this long-awaited piece of infrastructure. 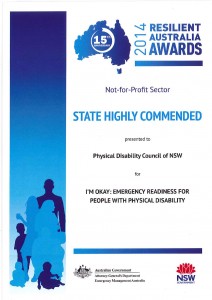 The purpose of the ‘I’m Okay’ website is to enhance the knowledge and capacity of people with a physical disability to increase their ability to respond to an emergency situation or disaster.

The website aims to provide information and tools that are useful and practical, to assist people with disability in being prepared in emergency situations including fires, bush fires, storms, and personal safety.  Ultimately the aim is to empower individuals to develop their own emergency ready individual plans.

Since its launch in April 2014, the website has received an overwhelming response from stakeholders who have continued to use and promote the website. 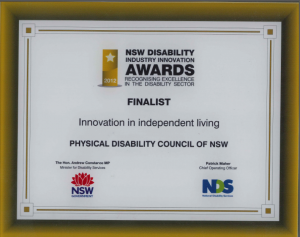 In 2014, PDCN received a State Highly Commended Award in the National Resilient Australia Awards 2014 for the website, ‘I’m Okay – Emergency Readiness for People with Disability’.

The website provides information and resources to assist people with disability to take ownership of and plan for emergencies and disasters.